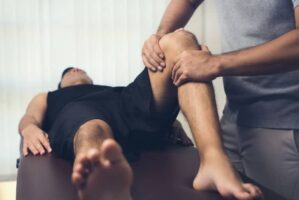 Think of your body like a car. Where the muscles are the shock systems and the skeleton (joints/bones) is the frame of the car. The job of the shock system is to absorb any force that is required to not “bottom out” on the frame of the car. Example: when you go over a speed bump, the shocks in your car are supposed to absorb that force and prevent the frame from taking any damage. This is the same job of the muscles in the body. When you perform an action, whether it is playing sports or sitting at a desk for a job, the muscles should be working to absorb the weight and stresses so that you don’t ‘bottom out” or rest on the skeleton frame for an extended period of time. The ligaments (in-between bone to bone) are not meant to take the majority of the force, their job is to be the fail safe (like a backup parachute) when the primary shock system doesn’t work properly. The intervertebral discs (IVDs) and meniscus are there to be a cushion between joints and allow easier movement.

So when you are in pain or get hurt, for the most part, the main reason is that the muscles (shocks) didn’t respond fast enough or were too weak to prevent the injury. The sympathetic nervous system is the “Fight or Flight” mechanism of the body and when you get injured it turns on to try and protect the body from any further damage. In this process the brain will shutdown/activate/tighten any muscle it needs to, to prevent damage to the frame of the skeleton and more importantly the brain and spinal cord.

The only way to turn off this “Fight or Flight” mechanism is to fix (or strengthen) the system that failed in the first place. This is the same reasons out hear people say, “I get massages, go to the Chiropractor and/or stretch all the time and it seems to help but keeps coming back.” Or “I took (said extended period of time off) and it still didn’t help and I have the same pain!”

The key component that is missing from most therapy programs is the strengthening aspect. Yes, the pain might be in your knee but more and due to another muscle (say the hip, low back, calf, etc.)  that failed and didn’t absorb the force to prevent the knee from getting injured. And the only way to tell the brain to turn off the protective mechanism and say “relax” is by strengthening whatever muscles (shocks) failed and caused the damage in the first place. A sports injury specialist (like a Sports Chiropractor) is trained to identify the muscle(s) that are weak and muscle imbalances to get your back to doing what you love as fast as possible.